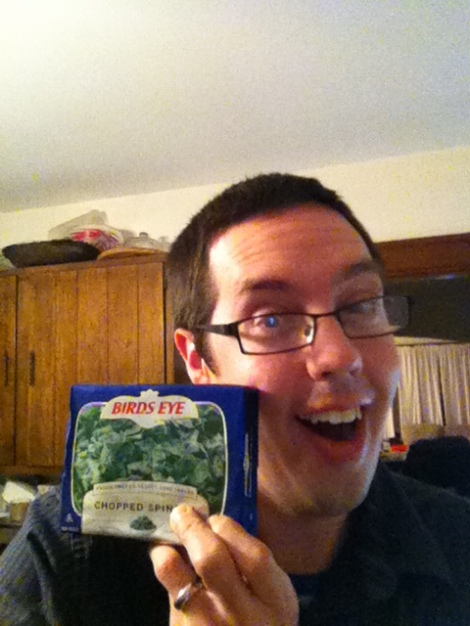 Spinach is the comeback kid of vegetables.  I say this in the midst of the Kale Invasion.  The other day I openly guffawed at someone mentioning making kale chips.  I wondered how one made chips from kale.  I was promptly put in my place, being told how to do it and how good they are.  Now, I’ve had kale raw, and I’ve had it cooked, and I am not convinced this veggie has staying power in our food consciousness.  I know it’s popular now, but it too will be put back in its leafy place, along with chard (which I do like better than kale), and other leafy also rans.

Spinach on the other hand, has really climbed to the top of the vegetable heap.  I thought of this the other day during a visit to Costco.  Spinach is in EVERYTHING.  On that particular day, you could sample spinach-artichoke dip, and these AWESOME veggie patties that contained spinach and garbanzo beans.  Down in the frozen food aisle, there was frozen Spanakopita (Greek Spinach Pie).  Finally, you could just buy a giant container of fresh baby spinach leaves, which I noticed had mostly sold out.

I like to consider myself a trendsetter.  I have LOVED spinach since I was a kid.  I have mentioned that my Grandma Toedebusch made fantastic spinach, and it was my go-to vegetable as a child.  It was a rather lonely club I was in at the time, while other kiddos went for the carrots as their favorite veggie.

Back in the 1980s, I don’t think spinach held the place it holds in our hearts today.  If you think about it, spinach was a joke.  Popeye* was the most famous spokesman for and he didn’t exactly put spinach into the best light.  He’d be stuck in a corner as Olive Oyl was being assulted in some way by Bluto.  Boom, a can of disgusting spinach would materialize, he’d pop it in his mouth and he’d become a raging hulk of vegetable fueled fury, pummeling those in his way.  I also remember that his (kids? nephews?) hated spinach.  Anyway, this was the best advertising spinach had.

*I always wonder how Popeye got into the fried chicken business.  Was he tired of vegetables?  I’d love to see a cartoon of Popeye in a crisis, and instead of eating spinach and becoming a mega-ultra hero, he eats a bucket of fried chicken and takes a nap.

Anyway, I don’t remember spinach being in much of anything other than spinach.  Today, however, spinach has found its way into pizza, pasta, dips, and numerous other tasty treats.  It took a while, but spinach has certainly has come a long way in the last few years.  Well done, wonderful vegetable, well done.

So, without further ado, I give you ten thoughts on spinach.

1.  Spinach-Artichoke Dip is AMAZING.  I could go through a whole Costco container in a single evening (did I hear a personal challenge?).  It’s even better when it is homemade.  Here’s a link to an AWESOME recipe from a fellow blogger.

2.  If spinach had a citizenship, it would be Iranian.  According to food historians, this leafy green originated in Persia (modern day Iran).  Spinach tends to keep this on the down low when dealing with TSA agents.

3.  So do the Iranians make grow the most spinach of any country today?  Um, no.  China produces 85% of the world’s spinach…interestingly I’ve never had spinach in a Chinese restaurant.  I suppose they are keeping it to themselves.  Hooray for the USA!  We’re number two!

4.  I always like the word Superfood.  Spinach is a superfood.  It has 100% of your vitamins A and K*.  It helps your eyes, heart, and colon…and if I’ve learned anything by listening to the radio, a healthy colon means a healthy you.  Sadly, as with any super vegetable, it has it’s kryptonite.  Healthy spinach hangs out with cheese and cream a little too often.  Healthiness fading…deliciousness rising.

5.  There are three types of spinach.  Flat leafed, semi-Savoy, and Savoy.  Savoy has the really curly leaves.  Cleaning savoy spinach is a chore.  I’ve grown it a couple of times, and I never can seem to get all the dirt out of those curls.  Speaking of cleaning spinach…

6.  WASH YOUR SPINACH!  Spinach is a dirty pirate of vegetables.  It is one of the more pesticide laden of vegetables, and you want to get that off your healthy goodness.  Second, bacteria also find spinach delicious, resulting in a giant e-coli outbreak a few years back that sadly resulted in some fatalities.  Today, when you see fresh spinach, it often says TRIPLE WASHED.  That will continue until e-coli attacks again.  Then we will see QUINTUPLE WASHED!

7. I love saag.  Saag is Indian creamed spinach. I’ve never made it, but man, I go to town on that stuff at my two favorite Indian Restaurants. Copper Chimney and India Palace.

8.  Spinach loves the cold.  It is one of the hardiest vegetables, and is one of the first to come up in the spring.  Last winter the spinach I planted in the fall of 2011 survived into 2012.  Now, last year was a mild winter, but still…every other plant in the garden died over the winter.  NOT SPINACH!  Superfood indeed.

9.  I love the spinach bricks in the frozen food section.  Other vegetables do not have convenient sizes or shapes.  Spinach will stack up for you in nice, neat piles.  Not like those unruly bags of green beans and peas.  I appreciate the efficiency of spinach.

10.  Finally, my mom still makes my grandma’s recipe for spinach.  It’s the best.  If you’d like to find out how to make it, you’ll have to ask her.  I’m sure she’d like to talk to you about it. 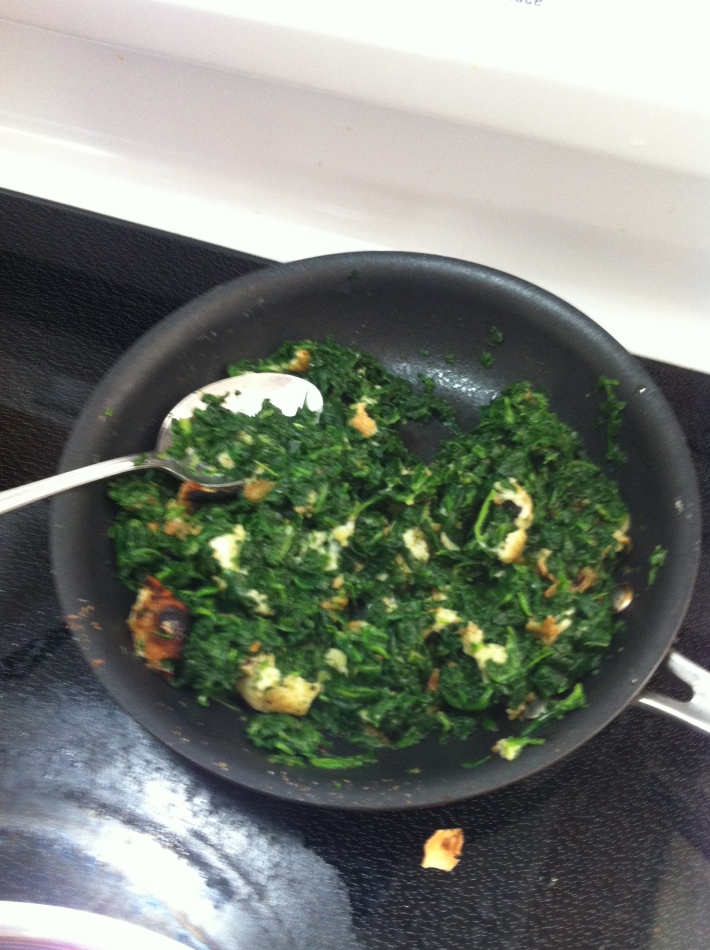